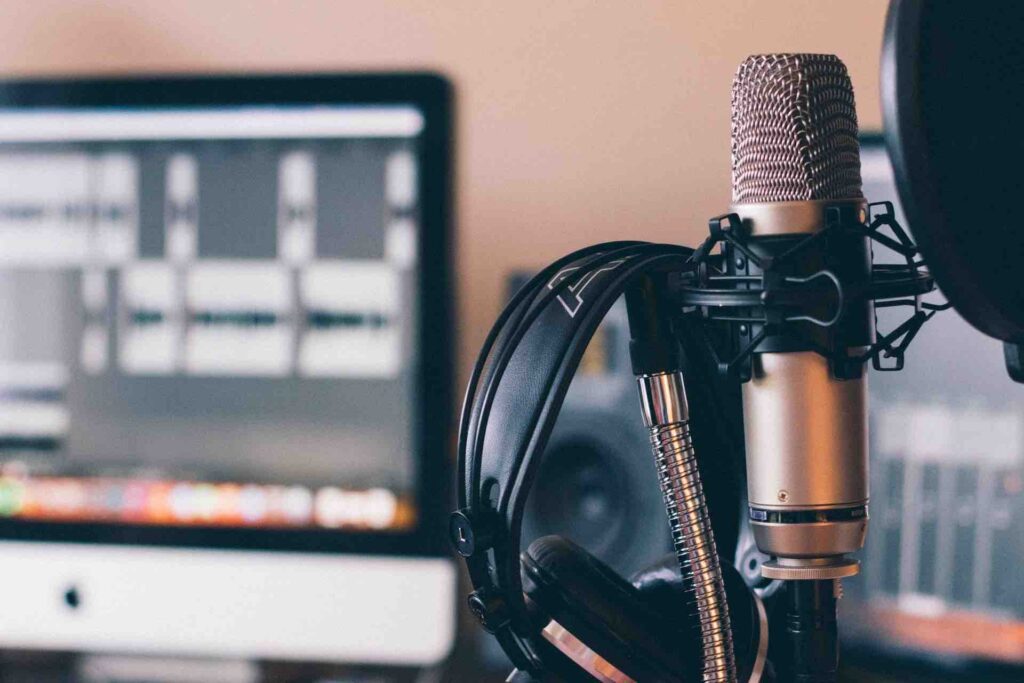 Are you wondering what the difference is between condenser and dynamic microphones?

Condenser microphones are more sensitive and can pick up a wider range of frequencies than dynamic microphones.

However, they require external power and tend to be more expensive.

Both condenser and dynamic mics have their own unique set of advantages and disadvantages.

Condenser microphones are generally more sensitive than dynamic microphones, meaning they can pick up more subtle details in sound.

However, this increased sensitivity also means that condenser microphones are more prone to feedback than dynamic microphones.

Dynamic microphones are less sensitive than condenser microphones, which makes them better suited for live performance situations (radio, podcasts, streaming, etc.) where there may be a lot of background noise.

So, which type of microphone is right for you?

It really depends on your specific needs.

How Does a Microphone Work?

Microphones work similarly to our ears; in that, they convert vibrations into electrical signals.

However, instead of using our eardrums as a sensor, microphones use a diaphragm – a thin piece of material that vibrates when it comes into contact with sound waves.

The vibration of the diaphragm is then converted into an electrical signal.

This signal can then be amplified and sent to a speaker, which converts it back into sound waves.

So, in short, microphones work by converting sound waves into electrical signals.

How Does a Condenser Mic Work?

A condenser mic needs phantom power to power its active electronics – typically between 9 and 52 volts.

This power is used to charge the capacitor within the microphone, which is necessary to convert sound waves into electrical signals.

The capacitor is made up of two metal plates.

When sound waves hit the microphone diaphragm, it vibrates against one of the capacitor plates, changing the distance between them and altering the capacitance.

This change in capacitance causes a change in voltage, which is then amplified and converted into an electrical signal.

Phantom power supplies the voltage necessary to maintain the charge on the capacitor so that it can continue to convert sound waves into electrical signals.

There are many advantages to using a condenser microphone, including the following:

Condenser microphones are extremely sensitive and can pick up even the slightest sound.

Their sensitivity makes them ideal for capturing subtle details, which is why they’re widely used for vocal recording in professional and home studios.

Having a wide frequency response allows them to reproduce high and low frequencies accurately, making them great for capturing the full range of sounds in a recording.

1. Piano – using a pair of condenser microphones placed at the back of the piano can help capture both the instrument’s direct sound and the reverberation in the room – resulting in a richer and more lifelike recording.

2. Acoustic guitar – by placing a condenser microphone just off to the side of an acoustic guitar, you can capture both the direct sound of the instrument as well as its natural body resonance. This can give your recordings a fuller and more realistic sound.

3. Vocals – whether you’re recording a solo vocalist or a full choir, condenser microphones are often the best choice for capturing clear and detailed recordings.

4. Strings – when recording stringed instruments such as violins or cellos, using a condenser mic can help to capture their natural resonance and timbre.

5. Brass and woodwinds – condenser microphones are also well suited for recording brass and woodwind instruments. By positioning the mic close to the instrument, you can capture its direct sound with clarity and detail while still picking up some of the ambient room sounds.

6. Ambiance – in addition to capturing sounds from specific instruments or voices, you can also use condenser microphones to record ambiance or “room tone.” This can be useful for creating a sense of space in your recordings or adding atmosphere to film or video soundtracks.

How Does a Dynamic Mic Work?

In a dynamic microphone, the diaphragm also vibrates when it comes into contact with sound waves.

This vibration is then converted into an electrical signal by a wire coil wrapped around the diaphragm.

The mic can then send the electrical signal to a preamp.

Benefits and Downsides of Using a Dynamic Mic

A dynamic mic has several benefits over other types of microphones.

First, it’s much more rugged and can withstand being dropped or bumped around.

Finally, dynamic mics are usually less expensive than other types of microphones.

The main disadvantage of dynamic microphones is that they tend to have a narrower frequency response than other microphones.

As a result, they may not capture the full range of sounds present in a given performance or recording.

Why are Dynamic Mics Better for Recording Guitar Amps?

Most guitarists I know use dynamic mics to record the signals from their guitar amps.

Dynamic mics are typically better for recording guitar amps because they can handle higher sound levels without distorting.

Why are Dynamic Mics Better for Recording Drums?

Dynamic microphones are typically better for recording drums because they can handle high sound pressure levels.

Why are Dynamic Mics Better for Streaming and Podcasting?

Dynamic microphones are better for streaming because they are less likely to pick up background noise.

They can also withstand more wear and tear, making them ideal for use in a live streaming/podcasting environment.

One thing to keep in mind is dynamic mics produce a weaker signal than condenser mics.

As a result, they require more gain to produce a loud low-noise signal.

We recommend using an audio interface or a mixer with high max gain and a low EIN for the best results.

Another alternative if your interface isn’t suitable for a dynamic mic is a Cloudlifter. It’s a mic preamp that supplies 25 dB of clean gain.

You can place it between your microphone and audio interface to boost the signal.

Why Do Singers Use Condenser Mics over Dynamic Mics?

Finally, many condenser microphones offer built-in filters and pads that allow users to tailor the mic to their voice further.

One of the important factors to pay attention to when searching for a microphone is its polar pattern.

Polar patterns refer to the directionality of a microphone – how well it picks up sounds coming from different directions.

The three most common polar patterns are omnidirectional, cardioid, and bidirectional.

Bidirectional microphones pick up sound from the front and back while rejecting sounds from the sides.

They also tend to have a wider frequency response, so they can pick up more high-frequency details.

On the downside, condenser microphones are more delicate than dynamic microphones and require phantom power to work (a power source that most professional audio interfaces provide).

Dynamic microphones are less sensitive than condenser microphones, which makes them better suited for live performances where there might be lots of background noise.

They’re also more rugged and can handle being dropped or bumped around without sustaining any damage.

However, because they’re not as sensitive as condenser microphones, they don’t tend to pick up as much detail