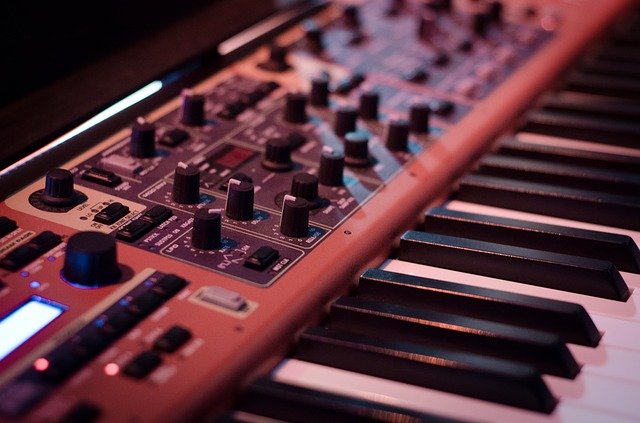 What’s the difference between a MIDI keyboard vs. a synthesizer?

A hardware synth can record MIDI, and a MIDI keyboard can control a synthesizer.

But their functions are entirely different.

Let’s compare the two, explain how they work, and help you decide which one to buy.

A synthesizer is a sound design tool that lets you create and manipulate sound. A MIDI keyboard lets you control other instruments, but it doesn’t produce sound. It sends MIDI signals to instruments, telling them how to play notes.

A synthesizer is a sound design tool, while a MIDI keyboard is more of a programming tool.

A MIDI keyboard is different from a synth because it doesn’t produce sound – it can tell instruments how to play notes.

But it’s not a standalone instrument like a synth or digital keyboard.

A hardware Synth is a physical device. It has multiple sections for knobs that let you control different aspects of a sound.

It usually has a keyboard attached but gives you more control over sounds than a keyboard.

A software synth gives you the same amount of control over sounds, but it’s virtual. Some popular software synths are Omnisphere by Spectrasonics and Serum by Xfer.

A Synth is a Sound Design Tool

Each synth is divided into multiple sections – each representing a different stage of the sound creation and design process.

A synth creates sound through oscillators that produce audio waveforms.

From there, this basic sound travel through a series of sound design tools – a filter, amplifier, envelope, arpeggiator, mixer, etc.; these tools are called parameters.

They let you shape an audio waveform to create a unique sound.

MIDI Keyboard vs Synthesizer: How MIDI is Different

Unlike a synth, it always needs an external source to produce sound.

It can control a synth, but you can’t use it to create and shape sounds like you can with a synth.

What’s the Purpose of a MIDI Keyboard?

MIDI keyboards range from 25 to 88 keys.

On the other hand, 61 – 88 key MIDI keyboards can simulate the feeling of playing a piano keyboard – especially with fully-weighted keys.

MIDI Keyboard vs Synthesizer: How One Each Works

How Does a MIDI Keyboard Work?

MIDI (musical instrument digital influence) is a language that allows MIDI controllers to communicate with other instruments.

Pressing keys on your MIDI keyboard sends MIDI data to your DAW via USB.

From there, your performance is visible in your piano roll when you record.

Virtual instruments understand MIDI messages and apply sounds to them.

How Does a Synthesizer Work?

Synthesize means to form by combining elements. A synthesizer does what its name suggests.

Each waveform sounds different based on how it vibrates and makes the air around it vibrate.

With a synthesizer, you can shape and manipulate these waveforms to create unique sounds.

Creating and Shaping Sounds with a Synth

Synthesizers are divided into sections.

There are oscillators that produce a waveform. And other sections where you can shape the waveform to manipulate the original sound; filter, envelope, modulation, amplifier, arpeggiator, mixer, etc.

Sections on a synth vary from model to model, but these are some of the most common ones:

Each waveform sounds different because they have different shapes.

In other words, they vibrate through the air differently.

Some synths have multiple oscillators. This lets you layer sounds to create something unique.

In summary, the purpose of an oscillator is to produce a basic sound that you can manipulate.

Sound travels from oscillators to a filter section.

Filters in synths are like an EQ in your DAW.

They let you shape different frequency regions to produce a desired sound.

In general, filters let you shape and manipulate shape sound by emphasizing or minimizing certain regions of its waveform.

The envelope is where you can give the sound character.

It controls how the volume of a sound changes over time.

Sound travels in four stages when you press a key; this is called the ADSR envelope:

The envelope section of a synth allows you to control these aspects of a sound.

In general, with a synth, you can take a basic sound from a waveform and give it character.

Can I use a Synthesizer as a MIDI Controller?

Yes. You can use a synthesizer as a MIDI controller.

Modern synths will likely come with a USB port to directly connect to your computer.

If not, most will at least have a MIDI OUT port. This port allows synths to send MIDI signals to other devices.

If a synth only has MIDI ports, you can connect it to your computer to send MIDI signals in two ways:

Should I Buy a Synth or a MIDI Keyboard?

By synthesizer, we’re referring to a hardware synth.

They still have a place in music, especially for synth enthusiasts.

They also add a unique element to any live performance.

However, music production is becoming more digital these days.

Most DAWs come with software synths.

Also, some of the most popular third-party VSTs like Serum and Omnisphere are software synths.

If you’re a beginner, chances are you’ve been using a synth and haven’t realized it.

Once the 80s hit, digital synths came on the scene.

They create sound by processing digital signals as opposed to using analog circuits.

This difference compared to analog synth made them more portable and affordable.

Producers still use analog and digital hardware synths even though software synths are more widespread.

MIDI was also born in the 1980s following a period of large and expensive analog synths.

It was invented so instruments manufactured by different companies could communicate with each other – letting one control the other.

Today, MIDI is used in every DAW, allowing MIDI controllers to communicate with software instruments.

They both play an essential role in modern music production.

Synths are more likely to be used as VSTs, while MIDI keyboards are used in almost every studio

Check out this Youtube video by Jade Wii, “Synthesizer vs. MIDI Controller”.