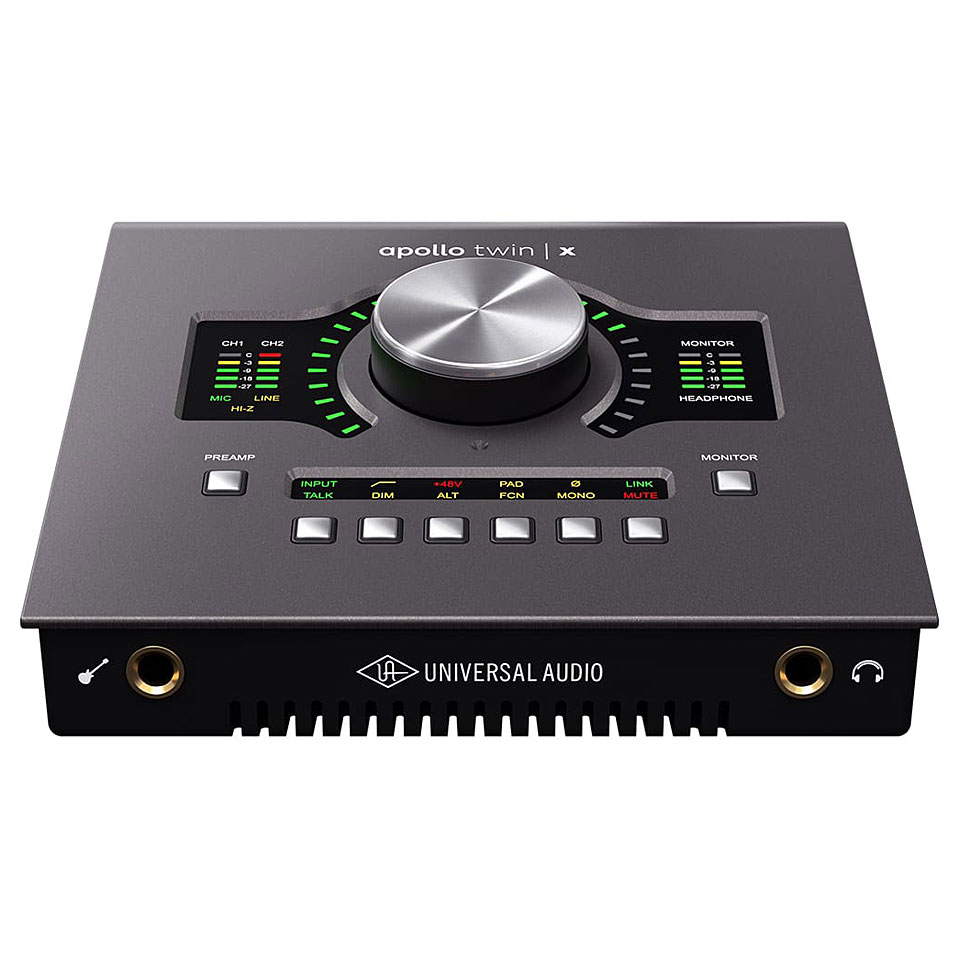 Since Universal Audio released its Apollo Solo interface, there’s been many questions on how it stacks up against the Apollo Twin.

If you’re familiar with Apollo audio interfaces, then you know they’re some of the best.

But what should you look for when deciding which one to buy?

Choosing between the two can be a huge decision.

The Twin is more than double the price of the Solo. However, it also comes with additional features that may justify the difference.

Here’s everything you need to know about the Apollo Solo and Twin before buying one.

We’ll compare them and recommend each based on your experience level and overall needs.

The main difference between the Universal Audio Apollo Solo and Twin is the Twin has more processing power.

The Twin comes with a dual or quad-core processor, while the Solo has a single processor. Therefore, you can run more DSP plug-ins simultaneously with the Apollo Twin.

We’ll explain DSP plug-ins in the next section.

Generally, we recommend the more affordable Apollo Solo if you want a high-end interface for a basic setup.

You’ll get the same audio quality and many of the same features you get with the Twin.

However, the Apollo Twin is better for mixing engineers who use a lot of plug-ins.

Its optical input also makes it perfect for collaborators. You can use this input to connect to other interfaces and expand your input count for larger recording sessions.

If you’re new to Apollo interfaces, we’ll discuss what makes them some of the best for audio and music production in the next section.

We’ll also provide a full comparison of each and help you decide between the two.

These plug-ins are digital emulations of UA’s classic analog gear, most notably the LA-2A and 1176 Compressors.

All you have to do is use one of the Unison preamp plug-ins on your mic channel.

When you use one of these preamp emulations, the interface will change its circulatory behavior to help replicate the tone from these classic preamps.

This flexibility is excellent for vocalists looking to find their sound or experiment with something new.

You’ll dramatically reduce latency by adding effects through your interface instead of your DAW while recording.

If you’re unfamiliar with audio latency, it’s the time it takes for an audio signal to enter and exit your system.

As a result, you’ll hear your recording in real-time, even with multiple DSP effects on your mic channel.

Apollo interfaces can handle plug-ins because they have computer-like central processing units (CPU).

Since they process effects internally, they reduce latency and take some stress off your computer’s CPU.

Similarities Between the UA Apollo Solo and Apollo Twin

Differences Between the UA Apollo Solo and Apollo Twin

The UA Apollo Twin features two combo Unison-enabled mic/line inputs on the back.

Lastly, the Twin comes with a 12VDC power connector, Thunderbolt port, optical input to expand your inputs, and a power switch.

The first thing you’ll notice when holding this interface is how hefty it feels compared to more affordable units.

It has a complete metal housing, and the knob on the top doesn’t wiggle at all.

You also won’t have to worry about movement with your inputs when connecting cables.

Overall, it has the build quality we’d expect from an interface in this price range.

The Apollo Twin features an LED level meter with a clipping indicator for each input and output.

It also has a volume meter around the main knob.

Additionally, you’ll get an LED panel with surrounding buttons to control specific settings.

First, you can switch between each input with the “preamp” button. Then, you can adjust the gain for each channel with the large volume knob.

When you select the “preamp” button, here’s what you can do with each of the six buttons on the bottom.

On the right of the LED panel is a ‘’Monitor” button. This button lets you use the volume knob to adjust your main output and headphone volume.

Here’s what you can do with five of the six buttons on the bottom when selecting the Monitor button.

The Apollo Twin Duo and Quad are the same interface, except the Duo has two processing cores and the Quad has four.

You can run more DSP plug-ins simultaneously with the Quad since it has more processing power.

It’s hard to determine exactly how many more plug-ins you can run since effects vary in how much CPU they use. But generally, the Apollo Twin X Quad is best for mixing-heavy engineers and professional home studios.

The UA Apollo Solo comes in a Thunderbolt and USB-C version.

You’ll need a Windows or Mac computer with a Thunderbolt 3.0 port to connect to the Thunderbolt version.

Conversely, unlike the Thunderbolt version, the USB-C model has a 12V DC power connector and a power switch.

Overall, the Solo has some of the same controls as the Twin in a more compact design.

The Twin has a built-in mic that lets you communicate through your interface and other features you can enable through the Monitor button.

These Monitor features aren’t present in the Solo.

Apollo Solo vs Apollo Twin: Which one Should you Buy?

We recommend the Apollo Solo – and maybe even the more affordable UA Volt 2 – for music producers.

If you just need an interface for high-quality playback, not recording, the Apollo Twin may not be necessary.

In our opinion, the Solo may even be overkill.

However, you can’t go wrong with either of these models if you also record samples and vocals.

With Unison-enabled mic preamps, you can instantly change the tone of your audio to make it sound brighter or warmer.

You can also add compression or reverb while recording without adding latency.

If you’re a self-recording artist looking for an interface that can enhance your sound, we recommend the Apollo Solo.

You’ll have an additional mic input if you want to connect a mic and guitar at once.

You’ll also get additional features like the high-pass button allowing you to make quick changes without hampering your creativity.

The Twin is an excellent choice for mixing engineers, especially if you’re recording artists in your home studio.

You’ll get easily accessible buttons that control nearly everything you can think of in a studio.

For example, you can switch between monitors when mixing and referencing and even communicate with a vocalist in a separate recording room.

You’ll also have more flexibility to add DSP plug-ins than your will with the Solo.

The Apollo Solo is sufficient for a basic home studio setup.

If you’re only recording yourself or another artist, you’ll have all the inputs and features you need to produce professional-quality recordings.

Here is what you can do with the Apollo Solo in a home studio:

We recommend the Apollo Twin Duo or Quad if you’re aiming to make your home studio more professional.

Here’s what’s possible in a home studio with the Twin:

When you first get started in audio and music production, you never think you’ll spend over $500 on an audio interface. A microphone, maybe, but why spend this much when you can get one for a fraction of the cost?

The Apollo Solo and Twin aren’t your average interfaces.

They can take your home production to the next level and give you a level of control you won’t get with most interfaces.

While it can be tough choosing between the two, this guide aims to make your decision easier.

The main difference between the Apollo Solo and Twin is the Twin has more processing power. Therefore, you can use more plug-ins simultaneously.

If your goal is building the ultimate home studio, the Apollo Twin is one of the best interfaces you can get. But we generally recommend the Apollo Solo for basic home studio needs.