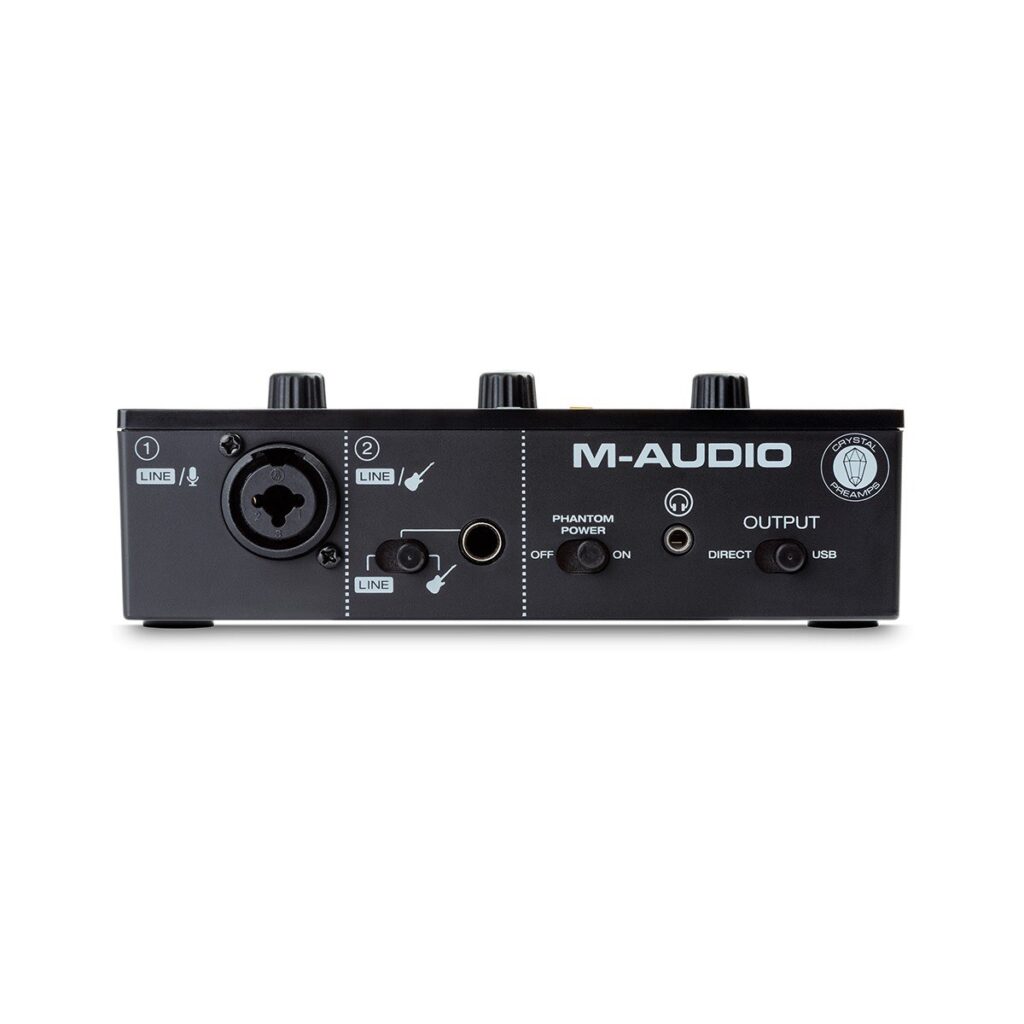 We all know how expensive audio and music production gear can get. If you’re on a budget, here’s the best audio interface under $50.

Honestly, while having a quality audio interface is essential, getting the best microphone, studio monitors, etc., you can afford is more important.

Here are some great options if you need to save some money on your audio interface to start out.

The Best Audio Interface under $50

The M-Audio M-Track Solo is the best audio interface under $50 hands-down.

The first time we looked at this interface’s price, we were skeptical.

So, we ordered one to check it out for ourselves. And honestly, we can say it doesn’t disappoint.

Obviously, it’s not the finest interface money can buy. But it stacks up pretty well compared to more expensive units we’ve used.

Let’s get into the details.

While the M-Track Solo doesn’t have the best build quality, it has a very clean design, especially for such a compact interface with this many controls.

This unit comes with a combo mic/line input and a ¼-inch instrument/line input with corresponding gain knobs on the top.

Each gain knob has an LED clipping indicator. When you see one of these LEDs flashing red, you can lower the gain for that channel until you see a green signal.

Next to these knobs is an output knob to control the volume of the RCA main output source – typically studio monitors.

The M-Track Solo also has a button on the front to toggle phantom power with a matching LED on the top.

Lastly, it has a 3.5mm headphone output, a switch to enable direct monitoring for zero-latency recording, and a USB-B port for bus power.

In terms of audio quality, this unit offers the best mic preamps we’ve heard in an interface under $100.

Its Crystal preamps offer an impressive 54dB of adjustable gain and an equivalent input noise (measures preamp noise) of around -129.5dBu.

This EIN puts the M-Track Solo on par with the more expensive Focusrite Scarlett Solo and in the top ten of entry-level interfaces.

However, the minimum sampling rate you need to record and playback the audible hearing range is 44.1kHz.

Anything more than that is nice to have but isn’t necessary. These days, even with 192kHz, most people record at 44.1 or 48kHz.

However, the M-Track Solo falls short compared to other interfaces in terms of headroom.

It has a dynamic range of around 90dB, which slightly outperforms the more expensive Behringer UMC22 but is lower than most interfaces.

90dB is still serviceable but gives you less wiggle room to amplify your audio or add compression in post-production – without introducing noise.

Overall, for 50 bucks, you can’t go wrong with the M-Track Solo, especially if you’re new to production and want an affordable, easy-to-use interface to try out.

You’ll get noticeably less headroom than more expensive interfaces, but it has better preamps than interfaces double its price.

[Check out our complete review]

The Behringer U-Phoria UM2 is the perfect interface for newcomers to audio and music production.

It’s so simple it almost seems like something’s missing. But for basic home and mobile recording, you’ll have everything you need to connect and control your gear.

The UM2 has a combo mic/line, a ¼-inch instrument input, and RCA outputs with a corresponding volume knob on the top.

Lastly, you’ll get a USB-B connector and a phantom power switch on the back with corresponding LED “power” and “+48V” indicators on the front.

Like the M-Track Solo, the UM2 has a lower build quality than more expensive unit. But we like how its knobs don’t stick out too much to protect them from damage.

It also features 48kHz/16-bit converters and a slightly lower dynamic range than the M-Track Solo.

While we recommend both interfaces, the M-Track Solo offers a slightly quieter mic preamp with more adjustable gain.

However, the UM2 still has an ultra-low noise preamp with an EIN of around -128dBu. It’s the second best audio interface under $50 in our opinion.

While we recommend investing in a high-quality interface for several reasons – increased audio conversion accuracy, more headroom, and better features – we understand how expensive audio gear can get.

If you’re slowly building out your studio and looking for the cheapest interface to get started, we recommend the Behringer U-Control UCA202.

At first glance, this unit doesn’t look like an audio interface.

However, it comes with RCA stereo inputs and outputs that connect your mic, instruments, mixer, and studio monitors to your computer.

Generally, we don’t recommend recording with this interface if you don’t have to. But for around $25, it’s a great affordable option for music producers who just need an interface to connect studio monitors and headphones.

If you’re willing to spend a little extra, the Behringer UMC22 is a great choice for around $60.

What sets it apart from the first three interfaces on this list is its built quality. It has an outer metal frame, making it more durable for mobile recording.

However, its knobs and inputs are a bit loose, and the interface does feel a bit hallow. From our experience owning this interface for a few years, durability won’t be an issue.

Regarding audio quality, the UMC22 features 48kHz/16-bit converters with a decent dynamic range of around 88dB.

A higher dynamic range means you won’t have to worry as much about clipping. But as long as you properly set your levels, the UMC22 will get the job done.

We list this audio interface as the best under $60 because of its build quality and solid audio performance for the price.

However, we recommend the slightly cheaper M-Track Solo if you use a dynamic microphone.

The UMC22’s preamps have an EIN of around -128dB, which is great, but you’ll get a slightly lower preamp noise and more adjustable gain with the M-Track Solo. But for a compact interface that will hold up better on the road, the UMC22 is an excellent option.

If you like the M-Track Solo but need more flexibility, check out the M-Audio M-Track Duo. It has the same audio quality, features, and design as the Solo, except you’ll get two combo mic/line/instrument inputs.

This additional combo input allows you to connect two mics or instruments simultaneously. You can even connect a mic or guitar and a preamp through the line input.

Unlike the Solo, the Duo also comes with a headphone volume knob and ¼-inch outputs instead of RCA. It’ll cost you about $20 more, but it’s worth it in our opinion.

We honestly don’t think an interface with as many features as the PreSonus AudioBox Go can get any smaller.

The fact that PreSonus can fit all of these controls on such a tiny interface is impressive.

It’s perfect for anyone looking for an affordable, user-friendly interface to get started.

This unit has a combo mic/line input and a ¼-inch instrument input with corresponding gain controls on the front.

Next to these controls are LED clipping indicators. When one of these LEDs flashes red, you can adjust the gain knob for that channel to avoid adding distortion to your audio.

Next, unlike most interfaces in this price range, the AudioBox Go comes with a Monitor Mix knob.

When recording, you can choose to hear audio directly from your inputs with near-zero latency.

Conversely, you also have the option to hear audio from your computer so you can add effects in real-time.

Conveniently, the Monitor Mix knob lets you control how much audio you hear from each source giving you more flexibility when monitoring.

Of course, no audio interface is complete without +48V phantom power. We like how the phantom power button on this unit lights up, making it easy to know if it’s on or off.

We also like that its ¼-inch headphone output is on the front panel.

While this seems like a small detail, the AudioBox 96 has a ¼-inch output on the back, which can sometimes be inconvenient.

It performs better than preamps in many more expensive interfaces with an equivalent input noise of around -128.5dBu and 50dB of adjustable gain.

In short, the XMAX-L preamp supplies plenty of clean gain, so you won’t need a Cloudlifter or Fethead for your dynamic mic.

We highly recommend the AudioBox Go if you’re willing to spend a little more than $50.