Audio Interface vs Sound Card: Everything you Need to Know 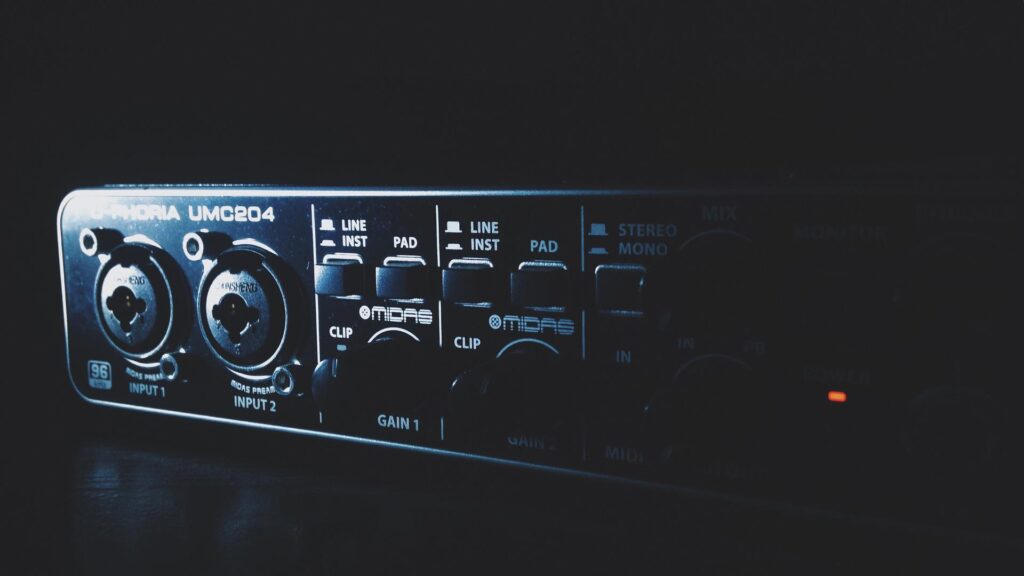 you can use the term sound card interchangeably for any device with digital audio converters.

Here’s everything you need to know about audio interfaces and sound cards.

Let’s start with an overview.

A Sound Card isn’t the Same as an Audio Interface

It’s important to note that every device capable of playing audio from stored (digital) files has a sound card – computers, tablets, smartphones, etc.

However, you can also purchase an external sound card to replace the sound card in your devices.

Sound cards are the foundation of digital music. Without them, digital music and audio production wouldn’t be possible.

They need a sound card to convert analog sound into digital signals and vice versa.

In other words, a sound card samples audio wave signals and creates a digital version for your computer. It also reproduces audio signals for playback.

The difference is that audio interfaces have more audio and music production features.

Let’s go into more detail on the differences and similarities.

An audio interface is an advanced version of a sound card.

With the music maker in mind, developers build interfaces with various I/O and advanced features for recording and playback. Features that aren’t present in your typical sound card.

There are two kinds of sound cards: internal and external USB

As mentioned before, every audio device has an internal sound card.

However, since devices like computers and phones have various functions, their sound cards tend to be subpar.

Luckily, you can purchase a better-quality sound card to replace your current unit.

They come in installable motherboard units with at least one 3.5mm mic input, line-in, and headphone-in.

Audio interfaces fall in this category. But there are also less advanced USB sound cards.

However, using an external unit is more convenient.

Since they connect via USB, you can improve sound quality without having to install a new sound card on your motherboard.

An audio interface is an all-around music and audio production tool.

You can think of it as a specialized sound card for music creation.

A standard interface will have XLR and TRS inputs for connecting guitars, mics, preamps, and other audio equipment.

Which is Better? A Sound Card or an Audio Interface

Audio interfaces tend to produce better audio quality – and have more I/O and features for audio production than sound cards.

Let’s go into more detail on four differences between the two.

4 Differences Between Audio Interfaces and a Sound Cards

There are four main differences between audio interfaces and sound cards.

Overall, audio interfaces are better than sound cards for mixing and recording.

You can break down a sound card into two parts: an analog-to-digital converter (ADC) and a digital-to-analog converter (DAC).

The ADC converts incoming audio signals into a digital format for your computer.

It does this through a process called sampling.

Then, it stores this information digitally as a binary series of 1s and 0s.

On the other end, a DAC converts digital information back into audio wave signals to produce sound.

Overall, your digital audio converters have a significant impact on sound quality.

It’s clear why computers have low-quality sound cards when you think about their other functions.

When manufacturers design computers, they put far more resources toward the CPU and other factors that affect performance.

On the other hand, companies design audio interfaces specifically for audio production.

With an audio interface, you’ll get dedicated converters that can record at higher bit-depths and sample rates.

As a result, your recording and playback quality will be more accurate and clear.

Typically, sound cards come with a 3.5mm mic input, line-in, headphone out, and a few other I/O.

Having 3.5mm I/O limits your ability to connect XLR mics and ¼ cables for instruments.

It forces you to use adapters and low-quality cables that can add noise to your audio.

Alternatively, most audio interfaces have XLR and 1/4-inch inputs for mics, instruments, and line-level devices.

[Here’s why you need an audio interface for studio monitors]

In other words, audio interfaces have less latency.

Latency is the duration between when you trigger a sound and when you hear it.

The last thing you want is a delay in your headphones when recording or producing.

2 Similarities Between an Audio Interface and a Sound Card

An audio interface is basically a sound card with more features.

The root of all audio issues lies within your device’s sound card.

You can either replace your internal sound card with a better one or purchase an external USB unit.

Either way, the key to optimizing sound quality is using a dedicated sound card.

Newer producers ask a common question: Do you need a sound card for audio and music production?

The answer is no.

You don’t have to replace your computer’s sound card or get a USB unit.

An audio interface will bypass your internal sound card and produce higher-quality audio.

As mentioned before, your recording and playback quality is based on your A/D and D/A converter quality.

While computers tend to have low-quality converters, audio interfaces excel in this category.

Many interfaces also have inputs and outputs with a flat frequency response and high dynamic range, low-noise transparent preamps, and extra tools for recording and playback.

Without getting too technical, all of these factors play a role in improving sound quality.

Generally, the more expensive interface is, the better-quality components it’ll have.

[Here’s why you need an audio interface for studio monitors]

Is the Scarlett Solo a Sound Card

Yes, the Scarlett Solo is a sound card because it has a D/A and A/D converter.

In general, all audio interfaces are sound cards with added features for audio production.

Upgrading your sound card will improve the accuracy and clarity of your audio.

For the best results, we suggest using an audio interface or improving your existing one.

You can also upgrade the sound card in your computer or get a standard USB sound card for gaming, audio, or video editing to enhance your listening experience.

[To learn how to install a sound card to your computer, click here]