Novation Launchkey 49 vs Arturia KeyLab Essential 49: Which is Best for You? 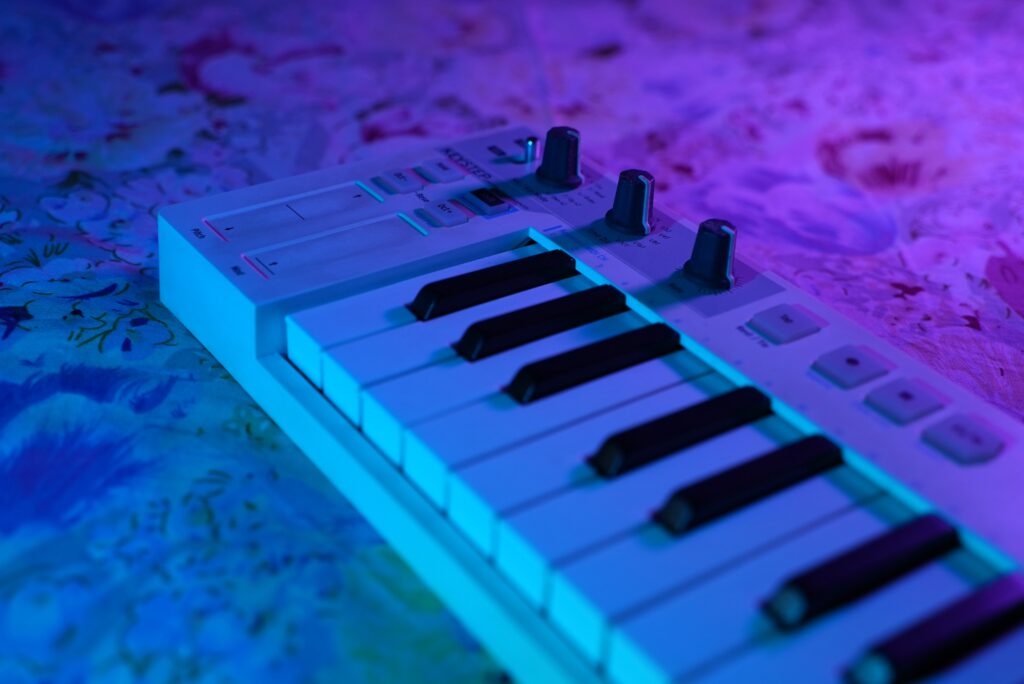 The Arturia KeyLab 49 MkII and Novation Launchkey 49 are two of the most sought-after MIDI keyboards – and for good reasons.

They offer a great balance between size and functionality, making them perfect for traveling musicians and those who want to save space in their home studio.

But with so many different features available for each, it can be hard to know which one is right for you.

In this article, we’ll compare the Arturia KeyLab 49 vs the Novation Launchkey 49 to help you decide which is better for your needs.

Arturia KeyLab 49 and Novation Launchkey 49 will give you an incredible amount of control over your music software.

But, what’s the difference between them?

One of our favorite aspects of the KeyLab 49 is its easy navigation. It has a clear LCD screen, a large scroll wheel, and illuminated buttons.

On the other hand, the Novation Launchkey 49 also has 49 keys, 9 assignable faders, and 9 fader buttons. But unlike the KeyLab Essential, it has a built-in arpeggiator and clip and scene Launching in Ableton Live.

If you use Ableton Live, the Launchkey offers more control than you’ll get with most MIDI keyboards.

However, it doesn’t have a comprehensive set of DAW controls as the KeyLab does.

Arturia’s KeyLab 49 also comes with premium sounds via Analog Lab and complete control over its presets with Analog Lab mode.

With the Launchkey, you’ll still get a nice software bundle, including Spitfire Audio LABS Expressive Strings, XLN Audio Addictive Key, and more. But we give the software bundle edge to the KeyLab 49.

Generally, we recommend the Launchkey 49 for Ableton Live, Logic, and Reason users, but the KeyLab Essential 49 is better if you use another DAW.

In the next section, we’ll detail each model to help you decide between them.

Some of the key features that come with the Arturia KeyLab 49 MIDI keyboard include:

The Arturia KeyLab 49 is compatible with all major DAWs.

The MIDI Control Center software provides extensive MIDI mapping capabilities, so you can customize the keyboard to work perfectly with your Workstation.

There are also DAW and transport controls located on the left side of the keyboard.

One of the best notable KeyLab 49 is its full integration with Analog Lab, Arturia’s highly sought-after virtual instrument with over 6,500 sounds.

You’ll also get onboard controls making it easy to browse presets, adjust parameters, and layer sounds.

The Chord Play mode on the Arturia KeyLab 49 is a great way to create interesting and complex chord progressions.

By holding down one or more notes, the KeyLab 49 will play a chord based on the notes that you are holding.

This feature can be a great way to create new and interesting chord progressions in your music.

Some key features you’ll get with the Launchkey 49 that you won’t with the KeyLab 49 are a built-in arpeggiator, scene and clip launching in Ableton Live, and a Capture MIDI and Quantize button.

If you’re an Ableton user, the Launchkey is a must-have.

Novation designed the Launchkey to control Ableton with no setup required.

It also fully integrates with Logic and Reason, but you’ll get the most out of it with Ableton.

Regardless of what DAW you’re in, you can use the knobs and faders to adjust parameters and levels, transport controls to play, stop, record, and the pads to tap out drum rhythms.

In Ableton, you can use the pads to launch clips and scenes, giving you the ability to produce and arrange full tracks without using your mouse.

The Launchkey will save your performance when Capture MIDI is enabled, so you never lose an idea when freestyling.

The Launchkey will play notes according to a specific scale regardless of what notes you play, so you’re always in scale.

Chord mode helps you create chord progressions without being a skilled keyboardist.

It lets you create your own chord presets – when you’re in chord mode, you can play a chord and save it to a pad.

Once you press that pad, it’ll play back the chord you saved. This way, you can create complex chord progressions without worrying about hand placement.

The Launchkey 49 has a built-in arpeggiator that you can use to create complex, rhythmic patterns.

To use the arpeggiator, select the notes you want to include in the pattern and press the “Arpeggiate” button.

The Launchkey 49 will then play the notes in your selected order.

You can adjust the arpeggio’s tempo, length, and direction using the control knobs on the front panel.

Arturia KeyLab 49 vs Novation Launchkey 49: Which Should you Buy?

So, which option is better for you?

The Arturia KeyLab 49 offers a great set of features with a premium sound bundle.

However, it doesn’t have as many features as the Novation Launchkey for Ableton, Logic, and Reason users. It’s also more expensive.

If you don’t use these three DAWs, we recommend the KeyLab Essential since it gives you access and control over Analog Lab.

On the other hand, the Launchkey is better for live performances and streamlining your workflow.