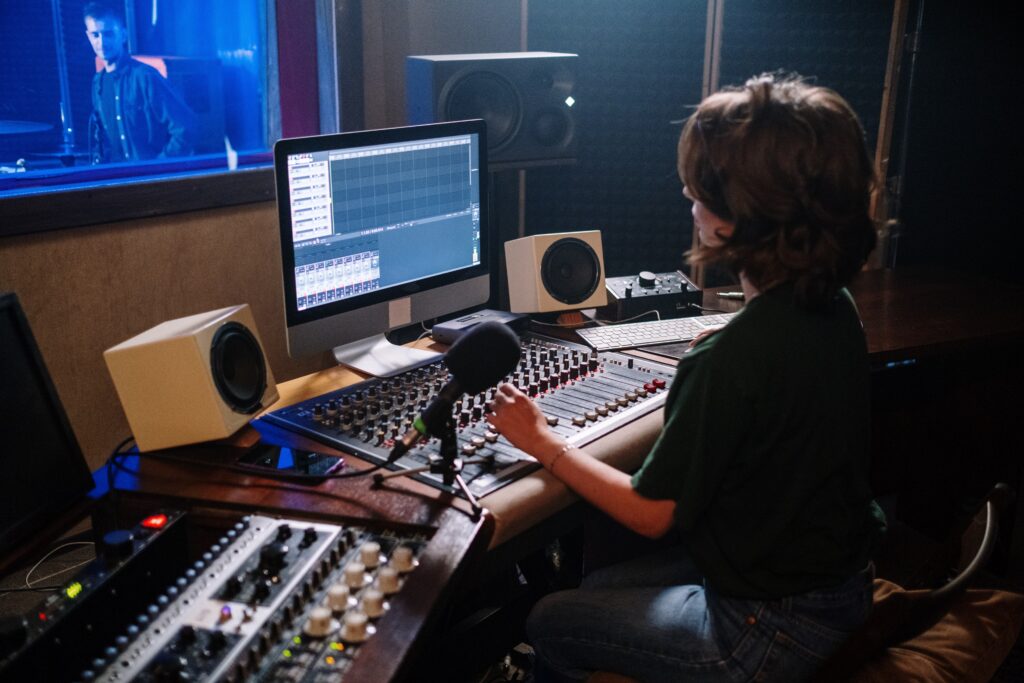 If you’re wondering what’s the best iMac for music production, look no further.

Overall, Apple iMacs are some of the most reliable desktops for home and professional studios.

But which is the best choice?

The 27-inch 10th generation Intel core i7 and i9 iMacs are the best iMacs for music production based on CPU performance and overall capabilities. The new 24-inch M1 iMac and the Mac Mini are also great options.

The 2020 27-inch 10-core Intel i9 is the best iMac Apple has to offer for music production based on its performance and overall capabilities.

It’s the best option for producers and engineers who need an ultra-powerful desktop to handle a heavy workload.

The 27-inch is one of the last Intel Macs available as Apple shifts to M1.

Even still, it’s more powerful than the only M1 iMac currently available – the 2021 24-inch.

According to Passmark (CPU Benchmark), the latest 27-inch i9 iMac performs around 42% better than the M1 model in CPU performance.

Not only does it have the strongest CPU of any iMac, but it’s also configurable to up to 128 GB of RAM and 8 TB of SSD storage.

The i9 iMac is an excellent option for audio production, heavy plug-in use, and workflow-intensive music production.

We strongly recommend the i9 if you need a reliable, high-powered machine in your home studio.

The 2020 27-inch 8 Core Intel i7 has the same features as the i9 version but it’s slightly less powerful – they’re both great options for music production.

Both the Intel Core i7 and i9 come with a 5K retina display, True Tone technology for an enhanced natural viewing experience, and a nano-glass option to significantly reduce glare.

The 24-inch M1 iMac is a great option for music production as well.

It can handle almost any workload thrown it’s way.

According to Apple, the 24-inch has 85% faster CPU performance than the latest 21-inch iMac models.

It’s also about 15% better in CPU performance than the 2020 27-inch i5 iMac based on Passmark ratings.

Where the M1 shines is in single-core performance.

According to Geekbench, the 24-inch scores higher than the latest 27-inch i7 and i9 in single-core performance by about 40%.

In addition to outstanding performance, the 24-inch is ultra-thin compared to the 27-inch models making it an ideal centerpiece for your home studio.

The M1 iMac comes with up to 16 GB of RAM, 2 TB of SSD storage, four thunderbolt / USB-4 ports, and two USB-3 ports, all at a relatively low price compared to other iMacs.

Overall, this Mac desktop has almost everything you need in a quality home studio desktop.

[Check out the latest price of the Mac Mini on Amazon]

We’ve included the Mac Mini on this list, even though it’s technically not an iMac.

It’s a great choice if you’re looking for a budget-friendly Mac desktop for your home studio.

The obvious downside to the Mac Mini is the lack of additional hardware (monitor, keyboard, and mouse).

However, this can be an advantage.

You can purchase a standard monitor, keyboard, and mouse and save hundreds while still getting the benefits of an M1 Mac.

Is M1 Better than Intel for Music Production?

In terms of performance, M1 iMac performs better than the latest Intel i5 iMacs but not the i7 or the i9.

The M1 has better single-core performance than all Intel versions but is still about 20% less powerful than the i7.

One of the most significant issues with M1 is compatibility.

Most programs and applications were initially designed for Intel and AMD processors.

However, an emulator called Rosetta 2 allows Intel native programs to run on M1.

These days, most programs have been optimized for M1 or reprogrammed to run through Rosetta.

Programs that are fully optimized for M1 allow you to take full advantage of the power M1 offers.

On the other hand, programs running through Rosetta will still run smoothly but not to their full potential.

If you use a lot of plug-ins, chances are a small percentage may not work at all on M1.

The problem is that M1 is so new. Compatibility won’t be an issue in the future as developers continue to adjust.

Why the 27-inch Intel iMac Models are Better

Not only do the 27-inch i7 and i9 perform better, but they also suit a broader range of needs.

The 24-inch iMac and the Mac Mini are perfect for the average producer’s workflow.

With the M1, 16 GB of RAM, and 512 – 2 TB of storage, you’ll be able to run multiple plug-ins / VSTs seamlessly – and record plenty of MIDI and audio without lags and crashes.

For a standard production setup, an M1 Mac is all you need.

However, below is a list of situations where we recommend a better processor or at least 32 GB of RAM:

If you feel like you’ll need better specs in the future, the latest 27-inch Intel iMacs are better options.

M1 desktops are limited at the moment, and you can’t upgrade specs for a Mac.

[Click here to learn the best specs for music production]

Apple has announced that it’ll soon phase out Intel-based Mac computers once it sells out of its current stock.

As a result, there’s no way to ensure that an Intel iMac will be a good investment for the next 5-10 years.

We’re sure it will be, but Apple may release something better and more affordable in the near future.

Waiting may be the best option if this new iMac is anything like the M1 Max MacBook Pro, which includes up to 64 GB of RAM.

But if you need a computer right away, the Intel models are still an excellent option – it’s still a great time to buy an Intel iMac.

This transition from Intel to M1 is just something to keep in the back of your mind.

If you’re searching for the best laptop, it doesn’t get any better than the M1 Max MacBook Pro.

The 10-core M1 Max MacBook Pro performs around 45% better in single-core and 40% better in multi-core performance than the 27-inch 10-core i9 based on the Geekbench scores.

The main difference is the 27-inch Intel iMac comes with up to 128 GB of RAM, while the MacBook maxes out at 64 GB.

In summary, the 27-inch 10 Core intel i9 is the best iMac for music production, even though Apple is phasing out Intel models in favor of M1.

If you prefer to avoid the Intel models, your best bet is to wait for the 27-inch M1 Pro / Max iMac, rumored to be released later this year.

The M1 Pro/Max MacBook Pro is also a great alternative if you can’t wait.

However, we still believe the latest Intel i7 and i9 iMacs are the best, followed by the M1 24-inch model, and the Mac Mini – even though it’s technically not considered an iMac.